The genesis of the Pacific2Nations movement began several years before the first meeting was held, as the Holy Spirit started stirring the hearts of several Pacific ministers and leaders in Auckland and the Pacific Islands to mobilise Pacific people for global missions.
The first group of pastors and mission organisation leaders gathered in September 2012 to discuss how they could mobilise
Pacific people for world missions. 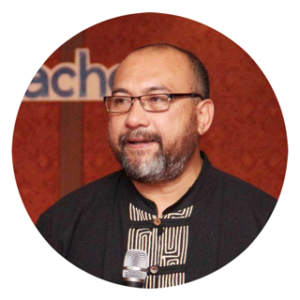 There has been a sense and evidence of sovereign connections taking place to achieve this vision. A recognition that Pacific peoples had taken Missions very seriously after they first received the Gospel through European Missionaries. Many went from Tahiti, Tonga, Samoa and the Cook Islands, and travelled west to Fiji, New Caledonia, Vanuatu, Solomon Islands and Papua New Guinea with the good news.

Many were martyred and died of sickness and disease, but when the news of someone losing their lives reached the country they had been sent from, then in many cases others quickly volunteered to take the place of those that had lost their lives.

The Pacific2Nations movement wants to stir this legacy again in the hearts of Pacific Island peoples, especially the younger generation, so that a fresh wave of Pacific people may be sent into the nations of the world. This is principally a Church-centred thrust, but also has tremendous support and input from Missions Interlink and several member organisations that actively support the Pacific2Nations vision.

A wide variety of Churches is already involved, from all spectrums of the body of Christ, including Mainline, Evangelical and Pentecostal Churches. All of them recognise that the time is right to re-engage Polynesians, Micronesians and Melanesians in a new wave of Missions in its various forms. Leader of the Pacific2Nations Movement, Pastor Lui Ponifasio says “We are not trying to recreate what our forefathers did in the 1800s and early 1900s, but we feel that they have handed over to us a strong legacy and a mandate to fulfil the heart of God by going to the nations, to unreached people groups as they did. This is our time.”

Pacific2Nations held its inaugural conference at the Vodafone Events Centre Auckland, on the 8th and 9th of November 2013. A second event was held in September 2015. Over 3000 people attended both events. In May 2017 Pacific2Nations was held in Sydney Australia. Similar mission events are planned for USA and the Pacific Island in 2017 and beyond. P2N500 is an initiative to reach 50 countries with the gospel in 2017. Over 500 missionaries will be sent from over 100 churches in short term teams with an emphasis to reach unreached people groups.