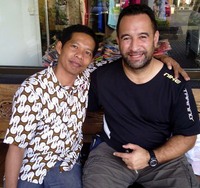 I had the privilege to go on my first ‘Do Missions’ with Team Indonesia in 2013 lead by the Indo Missions Man the legendary Bishop John Fale, with our team consisting of the Wonderful ‘mother of our team’ and Energetic Laine Sagala, the Performer Jordan Eliu, Miss Cook Islands Kimberly Tangaroa, the Pastor’s daughter the ever Graceful Miss Grace Ponifasio and the youngest member and the Forever Happy and Smiling Miss Tenique Fale.

Our Missions team primarily did worked with Mercy Indonesia working with Orphanage children in the densely populated Island of Bali of over 4 million people all located in an area size roughly similar to that of Auckland in New Zealand.  We visited the headquarters of Mercy Indonesia led by Ps Paulus Wiratno in the main city called Denpasar. Ps Paulus is truly an inspirational man of God who along with his wife have spear headed Christian Orphanages throughout Indonesia which is the largest Islamic populated nation of the world.  Through these orphanages has established the growth of church planting throughout this nation.

We also visited and had to fly to another Indonesian Island called West Timor in a town called Atambua located in the centre of the island that took us eight uncomfortable hours to travel there.  This was the first Mercy Indonesian Orphanage that was established as a result from the 1999 West and East Timor War.  This terrible war left many children without parents and a home. Many of the oldest orphanage children who were very young at the time, are now 19 years old who told us of horrifying stories of witnessing their families been killed. These young adults have grown to be humble and loving people of God!

For me personally, visiting Atambua was the highlight of our Missions trip where we worked with the orphanage of young children and adults and also visited the Refugee Camp where people are still living in poverty 15 years after the War.  We personally saw God’s grace and love for All People, and witnessed the people’s appreciation and love for God despite the little possessions that they had.  I was humbled.  God humbled me!

I encourage you to take on the challenge and ‘DO MISSIONS’.  Its’ not just about you going out to help spread God’s word, but doing Missions changes YOU.